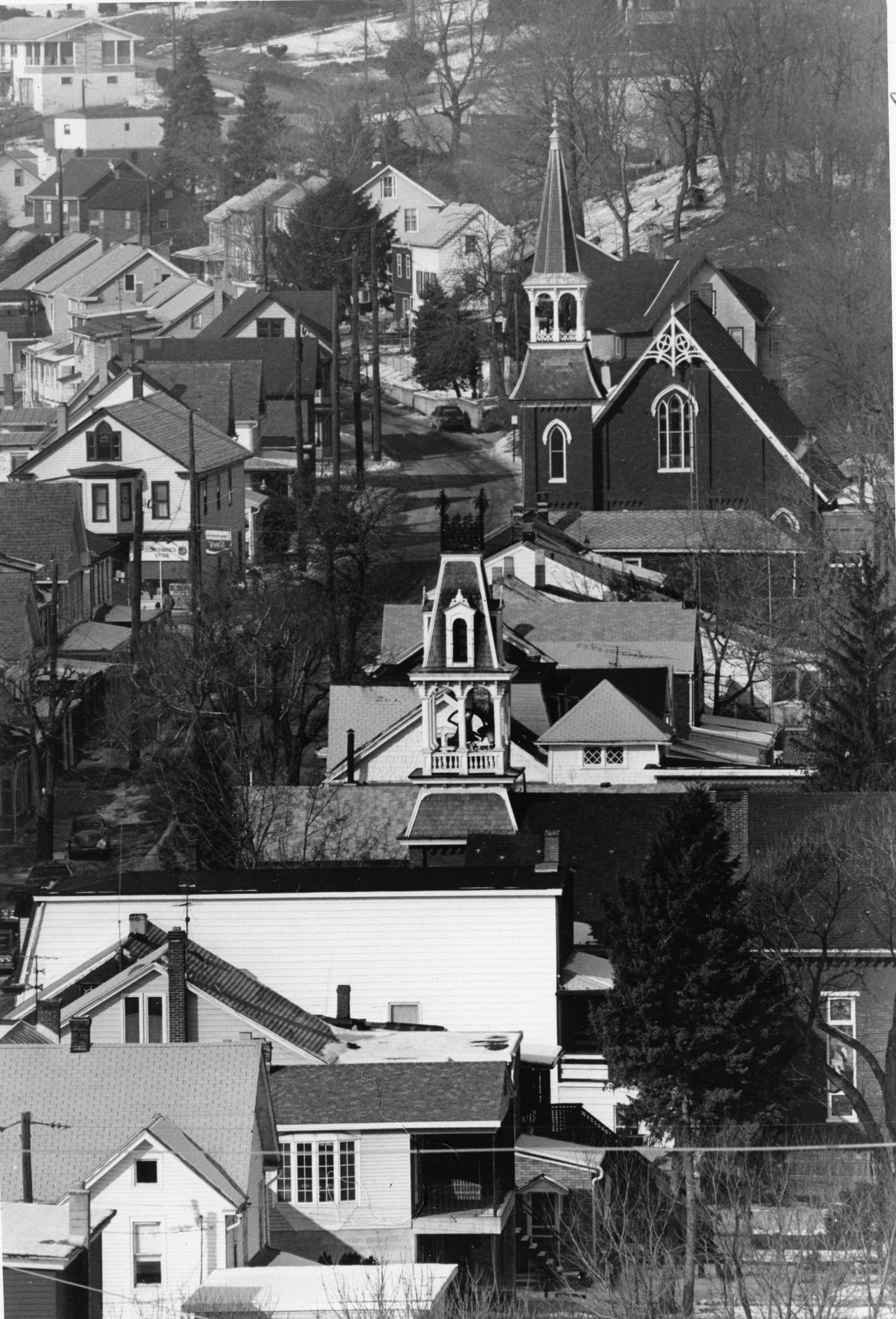 At midnight on New Year’s Eve 1997, as residents of Harrisburg watched the dropping of the strawberry celebrating the last minutes of the old year, across the river, residents of West Fairview watched their whole town drop.

The town of West Fairview, demoted to “village” after merging with East Pennsboro Township, is the kind of town most people drive through to get somewhere else. There are two common opinions from people who spend a traffic-light’s time in the town: “never heard of it” and “rat town.” There is another group of people, however, people who have spent their whole lives there. If you talk to them, you will hear tales of West Fairview’s glorious beginnings as an industrial town, a lot of “the good ole days” stories, and dismay at how the town has changed over the years. Despite its decline, the people with roots as deep as the 70-year-old trees their parents planted when they were born are still loyal to the town.

West Fairview is a half square mile of land bordered on the west by a creek, the north by the neighboring town of Enola, the east by the Susquehanna River and the south by a bridge where the creek empties into the river. Uptown and downtown are separated by a highway and railroad.

Large, brick arches still loom near the creek, remnants of the Harrisburg Nail Works built in 1810. The nail mill encouraged economic growth in the town which had already been settled for a hundred years. Any resident over 60 is well-versed in the role the mill played in their town’s history and can list the evolving names of the town on command: Poverty Point, Neidig’s Town, Fairview, and West Fairview.

The history of the town is not found in many books. It comes in the form of “I’ve always heard” and “that’s what the older people always said.”

The nail mill closed in the early 1900s, but the Enola Railroad yards, started in the late 1800s, were still going strong. The yards covered 300 acres of land and extended five miles along the Susquehanna River. During World War II, the rail yards consisted of 217 sets of track that handled 10,000 rail cars a day.

Don’t take my word for it

Years ago, I interviewed two amazing residents of West Fairview, Bruce Hoke and Fib Boyer. Both men have since passed, but their words still capture the spirit of this small town.

At that time, Bruce Hoke, then 69, explained the decline of the railroad after World War II as one of the biggest changes to the town.

“At one time 60 percent of this town was railroaders,” he said. “The trains just pass through anymore.”

There are many residents, like Hoke, who were born and raised in West Fairview.

“Everyone is related somehow or another,” he explained.

Hoke was less certain of his birthplace than some because he “wasn’t sure which house.”

The most popular resident and source for local history was Herbert “Fib” Boyer. Boyer, then 66, had watched the comings and goings of the townspeople for 40 years from his perch on the Inn’s front porch.

Only the older residents know his last name, and few, if any, know his first name. Boyer laughed and explained that most people think his nickname came from lying, but when his devotion to the radio show “Fibber McGee and Molly” would lure him in from playing on a weekly basis, the nickname stuck.

Boyer lived in the Inn, an apartment building with a bar on the first floor, since 1964. Passing its porch is the only way out of downtown.

Men would gather on his porch regularly to reminisce and laugh at their old antics.  Boyer’s witty sense of humor was still strong. When a man who sounded like Gilbert Godfrey approached, Boyer whispered, “Here comes Bob Hope’s brother, No Hope.”

Boyer still has a stocky body from when he played football.

“I was called the triple threat,” he said with a grin. “Mumble, stumble, and fumble.”

He recalled fondly the way the town used to be. “You didn’t have to lock your doors,” he explained. “And beer was the hardest thing we had.”

“I wouldn’t want to grow up any place else,” he assured with the other men echoing his sentiments.

For as long as anyone can remember the town was financially poor, but it was moral and ethical poverty that put the town in need of a merger. Cases of embezzling and misuse of funds added to an already bad economic situation for the town which kept the borough on the brink of bankruptcy. The town may have been bankrupt when it merged, but it did so with no debts and heads held high.

Rich in history, as well as love and loyalty from its multi-generational residents, West Fairview passes in the blink of an eye to the rest of the world. But, to those of us who grew up there, it’s our whole world.